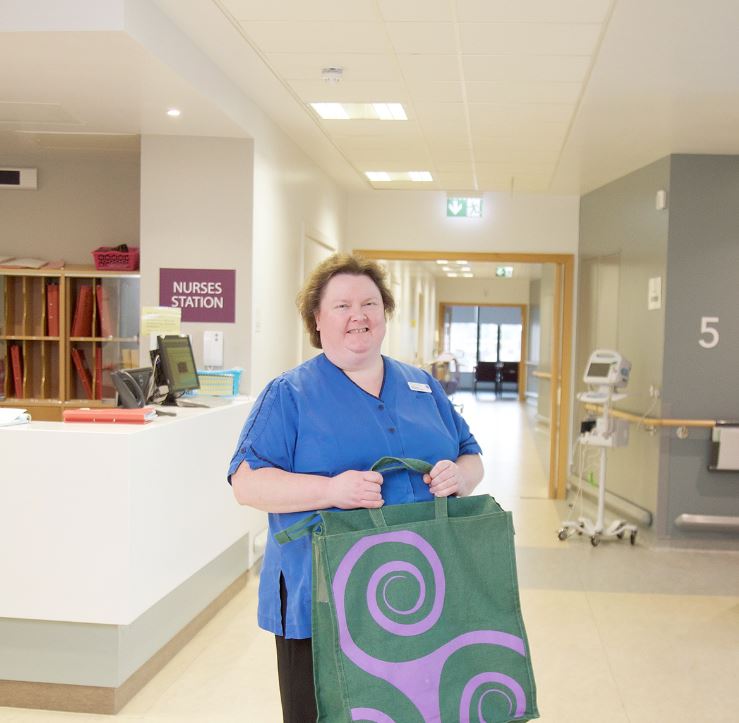 The ground-breaking hospital “handover bag” initiative is being copied in Australia to improve care provided to patients at end of life and their bereaved families and friends.

The handover bag concept was first introduced in Irish hospitals as part of the Irish Hospice Foundation’s pioneering Hospice Friendly Hospitals Programme (HFH) which is marking its tenth anniversary this year.

A high quality bag should be used

Marie Lynch, Irish Hospice Foundation (IHF) Head of Healthcare Programmes said:  “The principle of the family handover bag is to promote a dignified and sensitive way of returning the deceased patient’s personal belongings to the family. A high quality bag should be used in place of a plastic bag.

“It’s one of the initiatives introduced by HFH in Irish hospitals over the past decade in partnership with the HSE to bring hospice principles into hospital settings.

“Since its inception in 2007 the Hospice Friendly Hospitals programme has grown tremendously and this is down to individuals across Ireland who have worked tirelessly to raise awareness and improve the quality of end-of-life care.

“The HFH programme has continued to innovate throughout this time and lead end-of-life care not only in Ireland but internationally.”

The specially designed handover bags carry the end-of-life symbol which was introduced to hospital settings as part of the HFH programme.

Healthcare professionals in Queensland, Australia have now followed Ireland’s lead and developed their own end-of-life symbol and handover bag.

Ms Pearse said hospitals can do better “than plastic bags” when returning patient possessions to bereaved relatives and friends.

“After being inspired by the Irish programme we developed an Australian take on handover bags and a few other resources. The aim of the handover bags is to convey to the family and staff that whilst the person was a patient with us, we cared for them and respected them.

“We will treat their belongings with the same care and dignity that we showed to the person who died.”

Tenth anniversary of the HFH programme

HfH was introduced to bring hospice principles into hospital settings. An average 30,000 deaths occur in Ireland every year. Approximately 48 per cent of those people will die in an acute hospital.

The tenth anniversary of the HFH programme was marked today at an HFH Acute Hospital Network meeting in Cork, (Tuesday, May 23). Leaders in end-of-life care from more than 40 hospitals linked to the HFH are members of this network which meets on a regular basis throughout the year.

Dr Eileen Mannion, consultant in palliative care at Galway University Hospital, Roscommon University Hospital and Galway Hospice Foundation said:  “Since its inception in 2007 the Hospice Friendly Hospitals Programme has shone a spotlight on end of life care in the acute hospital setting. Through its ongoing commitment to education and research in this area it strives to ensure the highest quality of care for patients and their families at the end of life.”

Marie Lynch said:  “The Hospice Friendly Hospitals programme continues to grow across Ireland – there are now 47 hospitals involved, 20 hospitals have access to end-of-life care coordinators and all are implementing the National Standards for End-of-Life care which were developed by the IHF and the HSE in 2010.”

It was formed to further embed the Hospice Friendly Hospital Programme within HSE structures. It is also examining ways to expand and develop the programme across the hospital system where possible.

“We recognise the importance of this work to patients, their families and staff. The HFH Programme supports our goal of creating a caring and compassionate environment across our hospital system.”

The IHF receives core funding from Pobal from the Department of Housing, Planning, Community and Local Government’s Scheme to Support National Organisations 2016-2019.

This website uses cookies to improve your experience while you navigate through the website. Out of these cookies, the cookies that are categorised as necessary are stored on your browser as they are essential for the working of basic functionalities of the website. We also use third-party cookies that help us analyze and understand how you use this website. These cookies will be stored in your browser only with your consent. You also have the option to opt-out of these cookies. But opting out of some of these cookies may have an effect on your browsing experience. Find a full list of cookies used on this site in our privacy policy.
Necessary Always Enabled
Necessary cookies are absolutely essential for the website to function properly. This category only includes cookies that ensures basic functionalities and security features of the website. These cookies do not store any personal information.
Non Necessary
Any cookies that may not be particularly necessary for the website to function and is used specifically to collect user personal data via analytics, ads, other embedded contents are termed as non-necessary cookies. It is mandatory to procure user consent prior to running these cookies on your website.
Analytics
Analytical cookies are used to understand how visitors interact with the website. These cookies help provide information on metrics the number of visitors, bounce rate, traffic source, etc.
Other
No description
Advertisement
Advertisement cookies are used to provide visitors with relevant ads and marketing campaigns. These cookies track visitors across websites and collect information to provide customized ads.
Performance
Performance cookies are used to understand and analyze the key performance indexes of the website which helps in delivering a better user experience for the visitors.
Save & Accept
×