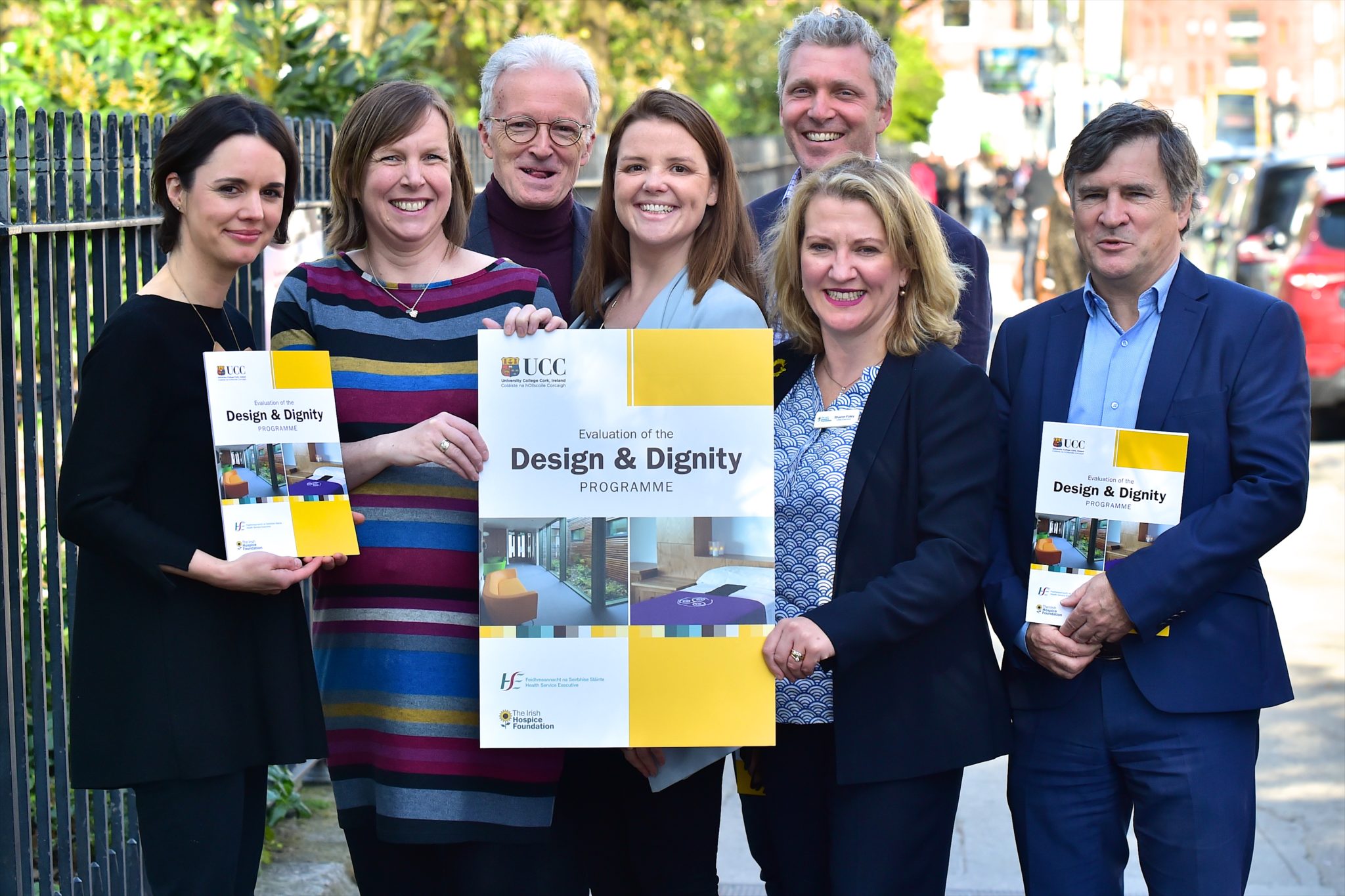 The unique impact of the Design & Dignity programme on end-of-life and bereavement care in Irish hospitals has been highlighted in a new report launched today (Tuesday 26 March) at the Royal Institute of the Architects of Ireland in Dublin.

The research carried out by a team from the School of Nursing and Midwifery in University College Cork (UCC) and commissioned through the All Ireland Institute of Hospice and Palliative Care, is the first review of the impact of the joint Irish Hospice Foundation (IHF) and HSE Estates programme.

The aim of Design & Dignity, which has provided funding to over 40 projects across Ireland so far, is to support the improvement of end-of-life and bereavement care in Irish hospitals through design excellence and evidence-based healthcare design. The findings of the Evaluation of the Design & Dignity Programme Report, which looks at Round One and Two Design & Dignity projects, show the significant positive impact it has achieved for patients, families and hospital staff alike across Ireland.

Speaking at today’s launch, CEO of the IHF Sharon Foley commented, “The vision of Design & Dignity is that every adult, paediatric and maternity hospital in Ireland has warm and welcoming spaces to enable dignity and respect for patients and families facing dying, death and bereavement. This flagship project is significantly shaping the overall culture of end-of-life care in Irish hospitals and it is truly wonderful to see the level of pride that staff feel having played a vital role in bringing their Design & Dignity projects to fruition.”

Conceived and launched in 2008, Design and Dignity was developed by the IHF as part of its Hospice Friendly Hospitals (HFH) programme, which works to improve all aspects of end-of-life and bereavement care in Irish hospitals. Design & Dignity specifically deals with the built environment and is a partnership programme with HSE Estates to provide quiet and peaceful places for family members and friends to avail of when someone close to them is dying. The programme funds a range of projects, provides architectural support and advice and design resources.

John Browner, Assistant National Director with HSE Estates said: “All too often the focus of capital development and investment in healthcare has been on the provision of bed numbers and the expansion and improvement of clinical areas. The introduction and roll out of the Design & Dignity initiative and concept is challenging us to ensure that end-of-life care takes centre stage in the projects delivered by the initiative. We aim to continue to provide much needed private, respectful, dignified and comfortable spaces for patients and families within the wider hospital environment, during difficult times.”

The UCC report is the output of an independent review of the impact of 18 Design & Dignity spaces, created from first two rounds of the Grants scheme funding from 2010-14. Researchers conducted focus group analysis with healthcare and support staff, interviews with bereaved relatives and collated data from real-time comment cards to provide the evidential basis of the report. The evaluation had two main objectives 1) to assess the impact of design from the perspectives of patients, families and staff and 2) to determine the likely factors contributing to the successful completion and maintenance of Design & Dignity spaces.

A staff member who was involved in the refurbishment of their hospital’s mortuary is quoted in the report as saying: ‘When I’m talking about the D&D projects that I’ve been involved in I would often describe them as the things that I’m most proud of in my career … I get a sense of pride every time I bring a group into the mortuary.’

Another staff member commented on the benefits of the rooms for families: ‘To have a place rather than leaving them on a corridor to wait for a consultant or – you can bring them in here for them to let their grief out, let their tears out… And there is no pressure on them – they can stay in the room for as long as they want.’

For families, a calm space in an emotionally charged situation was a prime benefit:

“It was like an oasis of calm to be honest. In the middle of these emotions and sickness, doctors and nurses, which is all an integral part of the day… here is this place that you could just close the door and kind of say “oh peace”.  Relative

“I think it was just a space that allowed us to kind of centre ourselves or to take a breath and just you know over time as well like ourselves, we’ll come to terms with the situation.” Relative

The Future of Design & Dignity

In addition to the launch of the UCC report, the IHF and HSE Estates also announced the next ten projects to be funded in Round Four of the Grants Scheme. These projects cover a variety of different facilities from emergency room bereavement suites to Intensive Care Unit family rooms. The hospitals receiving the grants are University Hospital Limerick, Beaumont, the Mater and Connolly hospitals in Dublin, Wexford General Hospital, Cavan General Hospital and the Midlands Regional Hospital, Portlaoise.

The Irish Hospice Foundation is the only charity dedicated to dying, death and bereavement in Ireland. 80 people die in Ireland every day and the IHF believes everyone has the right to be cared for and to die with dignity and respect in the care setting of their choice. Our mission is to strive for the best end-of-life and bereavement care, for all. The IHF campaigns to make excellence in hospice practices, bereavement and end-of-life care a national priority and to stimulate the conversation about dying, death and bereavement in Ireland. The IHF receives core funding from Pobal from the Department of Housing, Planning, Community and Local Government’s Scheme to Support National Organisations 2016-2019.