Westmeath people turned out in force at Annebrook House Hotel Mullingar to speak out about dying, death and bereavement

The Death Café Conversation was organised by The Irish Hospice Foundation as part of their ‘Have Your Say’ national campaign and all feedback from the café will inform the first ever ‘Irish Charter on Dying, Death & Bereavement 2016’.

Sharon Foley, CEO of The Irish Hospice Foundation was in Mullingar to meet with people and talk about the importance of this campaign. “The café conversation revealed amazing insights into what is priority at end of life and Mullingar surely had their say. Huge thanks to the warm crowd for giving such personal and valuable insights.

It really sparked conversations about end of life such as who will mind the dog when I’m gone, can I donate my body, we need a Last Aid Course to equip us to deal with dying, death and bereavement and it’s easier to talk to about other people’s death rather than your own.

There was a also resonating call for more bereavement services in Mullingar and it was clear that people want to talk openly about death to normalise this life happening.

Veronica Larkin of North Westmeath Hospice spoke after the event: “The members of North Westmeath Hospice Fundraising Committee were delighted to have the teams for Milford Limerick and from the National Hospice visit. The feedback from those who took part was so very positive. Participants enjoyed the structured manner in which the event was run while at all times having the freedom to have their say. Thanks also to The Annabrook House Hotel for their attention to detail.”

“People also completed the Have your Say survey on the day and all feedback will inform our ‘Irish Charter on Dying, Death & Bereavement 2016’ published next year. Anyone can complete the survey online https://www.surveymonkey.com/r/haveyoursayirl and follow the social media movement #haveyoursayirl,” continued CEO Sharon. 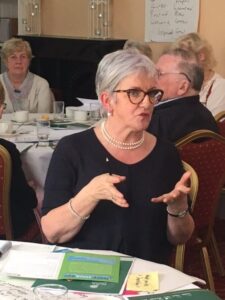 Every day 80 people die in Ireland; that’s 29,000 people every year. Each of us will only get once chance to die, so it’s important to think about what matters to you. We believe best care at end of life is about supporting everyone to live well to the end with dignity and comfort, surrounded by loved ones.

“We want you to #haveyoursayirl based on your experiences, knowledge, hopes and fears. We can then be informed on how to further ensure the best supports are in place for you and your loved ones. We are pleased to be leading such an important public discussion and creating this essential charter for the Irish people,” concluded Sharon.

The Irish Hospice Foundation is partnered with Limerick Compassionate Communities (part of Milford Hospice) in the project; and working with the support of Dublin City, Fingal and South County Dublin County Councils.